The server has been running stable now for quite some time in the new setup with several virtual machines providing the actual functionality using Kernel Virtual Machine. 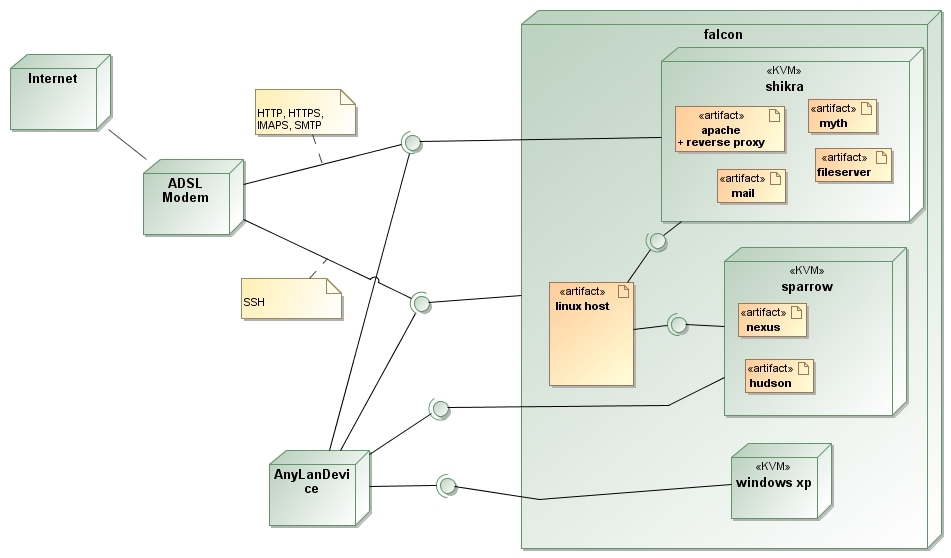 The setup is as follows. The host (falcon) is running a linux server and runs 3 virtual machines: shikra, sparrow, and windowsxp. These virtual machines are all running using KVM. The windowsxp VM is switched off most of the time and only runs when I need it. Its main purpose is that it contains some licensed software that cannot be transported to another windows installation because of licensing reasons.

The shikra image is basically the old server minus minus the continuous integration and maven functionality. Every linux virtual machine provides two network interfaces, one bridged interface for the outside world and one NAT interface for pure host-VM and VM-VM communication. The latter interface is mainly used for backups because in that case it is useful to minimize impacts on the external network interfaces. Sparrow is dedicated to automated builds and it provides the nexus repository for RPM generation. Having this functionality separate from the core server (shikra) is desirable so that automated builds cannot functionally impact shikra.

From the internet, all SSH traffic is forwarded to the host so I can always get into the server, even if a VM is having problems, and HTTP, HTTPS, IMAPS, and SMTP traffic is routed directly to shikra.

In the future I want to generalize this setup a bit more, by creating a separate VM for mythtv functionality. Also, I am considering to create a separate, very small, VM for just the reverse proxy.

As part of this setup I had to automate some tasks for starting up and shutting down VMs. This is provided by the kvmcustom package (see the yum repository) . Also see the post about automated management of this yum repo.

One Response to KVM Setup Overview