The final step in migrating ‘everything-email’ from my old server to a kubernetes setup is the migration of mailing lists based on mailman. In previous posts, I migrated the core mailserver and webmail to kubernetes. It s recommended to read the first post first because that one explains the full mail system architecture and dependencies. In this post we will be focusing on the last part, which is migrating mailman.

Before starting migration, it is important to get an overview of what components are involved and how they interact. This provides understanding that will make it easier to configure and  troubleshoot.

The architecture of a mailman setup is as follows. 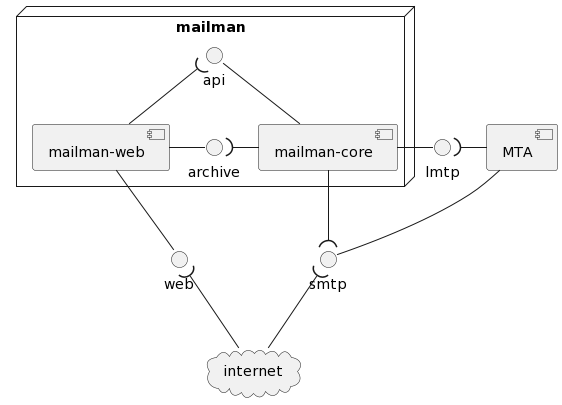 In the above picture, mailman-core and mailman-web are docker containers provided by the docker mailman project. As part of migration from mailman 2.1, which I am currently using, the mailman 3 project split up the architecture in a core project and in a web part. The core part provides mailing list functionality, and the web part provides management functionality using postorius and mail archiving functionality based on hyperkitty. Postorius and hyperkitty are both python applications on top of django and for convenience are hosted together in a single container. Postorius integrates hyperkitty in its user interface so for the end user it appears as if postorius is providing the archiving functionality. The mailman docker project also provides a postorius-only container without archiving functionality. You can also read about the mailman 3 architecture here.

Mailman-core and the MTA (postfix) communicate with each other. When a mail intended for a mailing list arrives, postfix receives this mail using SMTP and based on configuration delivers it to mailman using LMTP. Mailman then processes the message and sends individual messages out through postfix using the SMTP protocol.

Mailman-core archives mails through hyperkitty and so must use the API exposed by hyperkitty which is running in the mailman-web container. Conversely, postorius running in the mailman-web container uses an API provided by mailman-core to manage the mailing lists running in mailman-core. Mailman-web also provides a web interface through either HTTP or WSGI.  The latter interface is the python-specific way to expose web applications using the WSGI protocol. Technically, the archiving interface used by mailman is using the same HTTP port, but conceptually these are different interfaces.

To start of migrating things to kubernetes, the docker compose files are always a good place to start. However, in the examples I found both mailman-core and mailman-web both used the same database instance. This setup works but is weird since mailman-core and web are different components and so should be able to use different databases. Digging around in the documentation show this was the case. The picture below shows the required persistence for the setup. 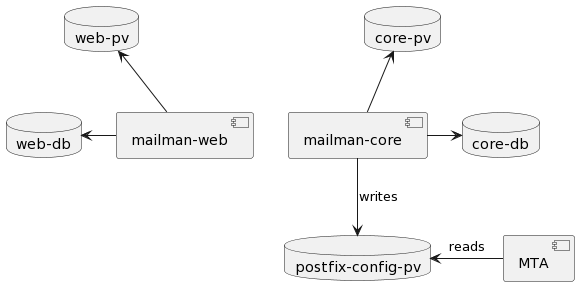 Both mailman-core and mailman-web require a persistent volume for storing files and a database instance. Mailman-core in addition, writes out mailing list configuration that is read by postfix and allows postfix to determine what mail to deliver to mailman-core.

In what follows it is assumed that it is well known on how to set PersistentVolumes and use a MySQL database to create databases and users. The discussion will be about how to configure mailman to interact with its surroundings.

In principle, the three involved containers docker-mailserver, mailman-core, and mailman-web can all be fully accessed using network communication so that colocation in a pod is not required. However, because of the close relation between mailman-core and mailman-web (the same versions of containers must be used), I have decided to deploy these two containers in one pod. The mailserver will still run in its own pod, which facillitates development, but which will also simplify later upgrades of mailman or the mailserver independently.

The only tricky thing which is not really as it should be with a kubernetes deployment is that the mailserver and mailman-core are sharing a persistent volume that stores configuration data. It would be better to have a more service based solution, where mailman would notify the mail container of updated configuration or where the mailserver could use a service on the mailman pod to retrieve configuration. With a shared volume there is no guarantee that the mailserver will use the updated configuration of mailman or how long it will take. However, since updates to the mailing lists will be rare in my setup, there is no real case for automating this aspect. Automation could be done by writing a simple webservice in for instance python flask.

Technically, this approach with a shared volume can work on kubernetes in the following ways:

In my setup, I am using option 1 because I am deploying most of what I have on the same node anyway. My setup is not about high availability but more about deployment and modernizing and reducing resource usage and learning in the process.

The following secrets and configmaps are used:

The secret mailman-extra defines additional configuration for mailman. It contains the following entries:

Both mailmancore and mailmanweb define a database URL to connect. However, mailman-core and mailman-web use different database drivers. The format for the url parameter in the secret is as follows:

The postfix configuration must be adapted to add the local network to the trusted hosts for opendkim signing to work. This is done by adding the following to the user-patches.sh script:

With this setting opendkim will sign any outgoing mail that has a From header for one of the hosted domains on the mailserver. This has to be used in combination with DMARC mitigation on Mailman to use ‘replace From with list address’. Without this, the original From header will be used, but since mailman has modified the mail, DKIM signatures will fail. I am also using the ‘Alter messages’ setting ‘reply goes to list’ This setting puts the original From header in the CC and adds the list address to the Reply-To header.

Additionally, postfix settings must be added to postfix-main.cf to forward mail intended for a mailing list to postfix.

Above, the local_recipient_maps settings appears not to be used. I had to use virtual_mailbox_maps, otherwise mail sent from external mail servers intended for the mailing list would not work. Also, I am not setting the relay_domains as recommended since this leads to postfix warnings. Instead, for every domain used by mailman, there must be at least one account on dovecot to make sure that all domains are recognized.

Using a subpath and read-only mouting, the postfix configuration gernerated by mailman-core can be used, exposing only the required files on the volume.

Note that when a new mailing list is added, it is a good idea to do a postfix reload in the mail container so that the changes are used immediately.

After the basic architecture explanation we can dive into the nitty gritty details. This means it is yaml time! The deployment consists of a StatefulSet together with a ClusterIP service. The mailman web interface will not be accessed directly from the internet so a ClusterIP service is sufficient.

The service for mailman finally is as simple as can be:

Exposure of the mailman web interface is finally done using the WSGI protocol in apache. The virtual host looks like this:

Network policies are defined in a similar way as was done before for webmail and other components. Since this is quite tedious and basically the same as before, this is not further explained.

Migration from mailman 2.1 to 3

Migration from mailman 2.1 to 3 works exactly as described in the documentation and in my case worked first time without any problems. To migrated, I collected the config.pck files describing the mailing list configuration (including all members) and the mbox files describing all mails collected. I copied the pck files to the mailmancore persistent volume and the mbox files to the mailmanweb persistent volume. The first step is to import the mailing list definitions. For this, perform the following steps:

To troubleshoot, I used a lot of techniques such as:

This was the hardest part of the mail migration. It started with figuring out the architecture of mailman, which is explained in just not enough detail in the available documentation. This is an essential step to understand what you are configuring and why. The docker compose setup was a bit hacky, with mailman-web and mailman-core using the same database instance, but of course a much cleaner way is to use separate database instances. In my case, I am using a custom resource that I developed myself to manage database instances and users, so the effort to go for a cleaner setup is really low. It also works though if you use a single database for mailman-core and mailman-web.

In addition, there were loads of issues at the detail level. It appears that the containers were specifically developed for docker compose and some configuration flexibility is missing which needed to be worked around. Also, the documentation of mailman did not appear to work always. Finally, I spent several evenings trying to get DKIM signing for mails sent by mailman to work. It would certainly have helped if someone had written an instruction specifically on this. Instead, there are loads of contributions on the internet of people describing the problem but not many describing the solution. Also, some obscure issues such as duplicate headers when using mod_proxy in apache were solved by using uwsgi instead of http proxying.

This completes the full migration of my whole mail setup from my old 2010 opensuse 11 virtual machine to kubernetes.