Sticky 911! Making it easy to quickly and reliably boot your linux OS from USB or CD/DVD

I have been isolinux in the past to boot my server. In fact, it used to be the only way to boot it because somehow my BIOS did not recognize the RAID card. That problem was solved later by a newer BIOS, but still there was a need to be able to boot the system when the boot sector was lost or to repair or restore things. 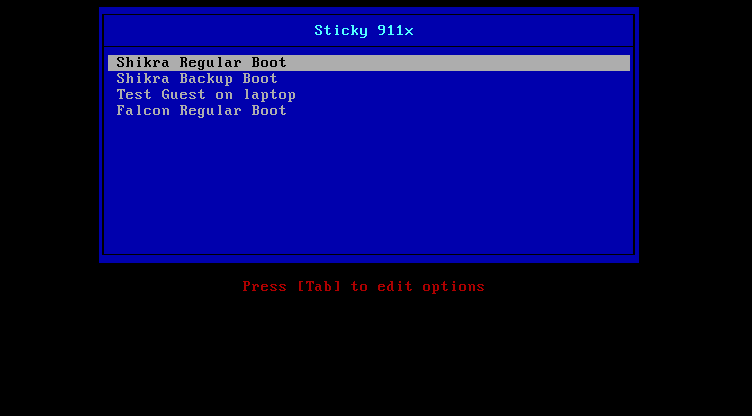 To solve this I had a boot cd under version control but still maintenance of the boot cd was a nightmare. One problem was the short names required by isolinux which resulted in initrd names such as ‘rd111p’ and linux kernel names such as ‘l111p’. Not really convenient if you just wnat ot be sure the the version you have on your isolinux CD/DVD is the same as the one you have installed. A typical vmlinuz name is much more descriptive such as vmlinuz-2.6.34.7-0.5-default.

In addition, it was quite a hassle to always burn a new CD/DVD every time there was a kernel update. So I decided to kill two birds with one stone and automate the whole process and in addition provide support for booting from USB (the new server supports it).

This resulted in a new ‘project’ which I call sticky911. The idea is simple, provide an XML based configuration of your system, eliminate duplication as much as possible and check the hell out of it, so that in the end you have a ‘first time right’ bootable USB stick or CD/DVD based on isolinux.

This entry was posted in Devops/Linux, Software. Bookmark the permalink.

2 Responses to Sticky 911! Making it easy to quickly and reliably boot your linux OS from USB or CD/DVD