Migrating a mailserver to k8s

It has been a long time since I setup a mail server. It started with my first mailserver on linux somewhere in 2000 using sendmail and University of Washington IMAP. This setup was assuming mail delivery to local system users. In other words, every e-mail had to correspond to a local system user. Getting it working was absolute hell, but it finally worked. Sendmail in particular seemed not to behave according to the documentation.

Then in 2006 my next setup was based on postfix and cyrus IMAP, decoupling mail boxes from system users. I bought a book about postfix and read it front to cover before starting. This was a much more pleasant experience. However, this was also not without fights in getting basic stuff to work. Over time, I added black listing, grey listing,  and spam detection to the setup. I also added a webmail user interface using squirrelmail later on. Finally, my ISP increased security and my mails often would get rejected. To fix this, my ISP required my to relay outgoing mail through their mail server and it turned out my postfix version was too low and could not handle it. I made a quick workaround for that by relaying outgoing mail to a newer postfix mail server running on another virtual server in my network. Problem solved, but it was getting painfully clear that the old setup was nearing its expiration date.

However, now it is time to say goodbye to this old setup. As part of my home project to migrate every workload from VMs to containers using kubernetes this is an ideal chance to get a new setup. Still a lot of respect for these older versions of cyrus and postfix for running for such a long time (16 years!) with basically zero maintenance. Would it be easier now, after all this time, to setup a new mail system? (spoiler alert: yes).

Below a typical mail setup is shown. 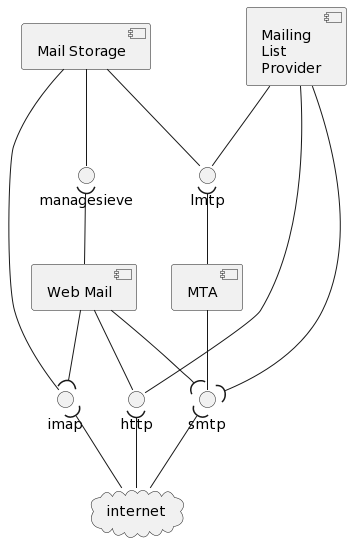 To begin with there is an MTA (Mail Transfer Agent) with the responsibility to relay mail to remote users and to deliver mail to a mail storage system. The MTA. speaks SMTP (Simple Mail Transfer Protocol) to the outside world using an older variant on port 25 and a newer one on port 587. There is also another standard for SMTPS on port 465 but that is considered obsolete by most  The protocol on port 587 is named submission and is more secure than basic SMTP on port 25. The MTA delivers mail to a mail storage system using LMTP (Local Mail Transfer Protocol) which is a simplified version of SMTP geared towards delivering mail to mail storage systems. The MTA also provides integrations with spam detection (Spamassassin), black lists, grey lists, and virus scanning. In my pre-kubernetes setup, I am not using a virus scanner, but the new setup will include one.

Mail storage systems usually implement sieve, which is a mail filtering language for defining mail rules that support things like moving mail to other folders based on criteria, deletion, and out of office replies. For the remote management of these rules, the managesieve protocol is used.

In general, mail systems are quite complex and are tightly integrated. Especially the integration between the MTA and the Mail Storage Provider is tight.

These days, many pre-built containers are available and it is not necessary, as 16 years ago, to install everything from scratch and configure the integrations between components by hand. Instead, pre-built containers can be used which can be configured by specifying a small number of configuration files or environment variables. The picture below shows the new setup that shows the kubernetes pods and services that will be used. 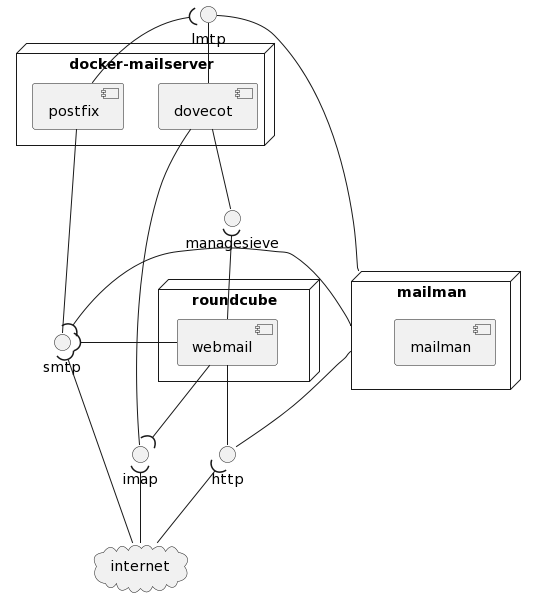 I have chosen the following components:

The exposed services can be divided into two groups, external and internal. To simplify configuration we create the following services:

This allows migrating the MTA, keeping the Mailing List Provider the same in a first step to avoid a big bang migration. To do this, we configure separate rules for relaying mails destined for a mailing list to the old mail server that hosts mailman. That old mailserver is then configured to relay all mail through the new mail server. The web mail migration is simply postponed since I can live without a webmail interface for a couple of weeks without problems.

To configure docker-mailserver, a number of settings must be done. These consist of:

The setup looks as follows: 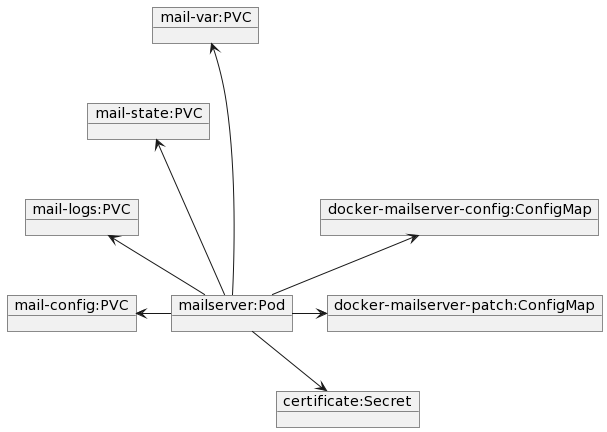 The mail-var, mail-state, mail-logs, and mail-config are PersistentVolumeClaim objects that must be mounted in the container and may be empty when the container is first started. Initial permissions for these empty volumes may be 755, owned by root. In my deployment I am using hostpath volumes for this. See for instance my post on wordpress on how to tie these volumes to a specific node.

The config maps are generated using Kustomize based on a number of files:

The secret finally is generated using automated certificate management. Note that only a single certificate is used. This is because I will be using only a single domain name to connect to SMTP and IMAP and I will use the same domain name for that regardless of the domain I am using for sending mail. It is possible to use different certificates but that makes the setup more complex and does not really add anything.

All the above information is then combined into a single yaml file. I am using a StatefulSet here since different mail server instances should have different state and they should not be initialized or configured at the same time. Using a StatefulSet keeps the volumes for each instance separate. I am using only a single instance since I don’t need any more than that. As usual, the kubernetes yaml file can be derived from docker-compose files that are published by the maintainers.

The mailserver is exposed using the following service:

Above, a LoadBalancing service is defined for the provided services. We use a fixed IP (# B) to support configuration on the router and externalTrafficPolicy of Local (#A). The latter is required so that postfix sees the original IP addresses of connections. Without this, black listing services won’t work. This approach with a single service is simple but exposes the managesieve port on the loadbalancer ip. However, access to the managesieve port can be restricted using network policies to just the pods that need it, see later.

The final configuration steps are to configure user accounts:

and to configure DKIM

This last step will generate private and public keys for DKIM for each domain for which you created mail accounts in the earlier step. The tool will show which keys it has created, for instance:

For data migration I used imapsync which is a tool that can synchronize mail folders on different mail storage systems using IMAP. Since it uses the IMAP protocol it doesn’t really matter what implementation is behind the mail storage system.

I used the docker image to avoid local installation problems. An example commandline is as follow:

Some important flags are

The final step is the addition of a new network policy to allow the mailserver to work:

The next step will be to deploy the webmail interface. After that, mailman will be migrated.

All in all this has been a lengthy write-up, but I think it would have been quite a bit longer without the use of the third-party containers and kubernetes. The setup was also a lot less nightmarish than my earlier mail setups.